REBORN ANIMAL REFUGE
Wolf Hybrids
W.O.L.F. Sanctuary reached out to Reborn about several Wolf Hybrid puppies that were abandoned & left to die by a breeder in California. There were 4 litters of puppies living under a home with the adult dogs. A groundskeeper essentially found them on the brink of death after going days or possibly weeks without food or water. They were taken to Predator Healing Project who nursed them back to health.
Reborn Animal Refuge rescued 9 Wolf Hybrids over Memorial weekend 2021.
Our colleagues/friends from several organizations reached out to us asking if we would be able to help rescue some animals in need, and of course, having the available space, we said yes.
We headed out for the long journey to Prescott Arizona to pick up 10 Wolf Hybrids.
We rescued 3 adults (2 females and 1 male), and the rest are puppies (5 females and 2 males).
1 of the female puppies we transported with us to go to another home.
We are blessed to be able to save all of these lives and work alongside our colleagues/friends at Predator Healing Project, W.O.L.F. Sanctuary and APEX Protection Project to make this rescue possible.
PLEASE consider donating or sponsoring any of the Puppies, Sampson, Delilah, or Mila.
Contact us at info@rebornanimalrefuge.org, on our FB page or Instagram page for information. THANK YOU
What is a Wolf Hybrid?!
A Wolf Hybrid is a mix between a wolf and a domestic dog. Hybrids are usually bred with a Huskie, Malamute or Shepard.
They can live up to 14 years.
Their temperaments are different from that of a dog or a wolf, which is why they do not make good pets. They are pack animals and need socialization with other dogs/wolves so they do not become fearful or skittish. Wolves are fearful of humans.
It is important to note that while these animals are a mix of Wolf and Dog, they are not one or the other. They will not behave with you the same as your dog at home. Their moods can change quickly.
Wolves and Wolf hybrids are very curious, social, have packs and are territorial. They can also be shy. Wolves are shy and timid of humans.
Wolf dogs will decide if you are part of their pack or not, and this takes time and patience. Each one has a different personality and story from their past, which can bring them fear, anxiety, shyness, etc. It takes patience to bond with these animals.
HOPE
care for me
HOPE - is the youngest of our puppies. We think she was 3 weeks old when we rescued her.  She was rescued with the rest of our other puppies however, she was from a separate litter and found to be the only survivor amongst her siblings.💔
Hope has received some extra TLC because of how small she was when we rescued her and because she came to us with an injury to her vulva, which will require surgery.
Hope is growing quickly and she is keeping up just fine with her "brothers and sisters". She is a sweetheart, very submissive, a bit of an instigator, while playing the innocent card and loves to dig.
Please consider sponsoring towards her surgery.
SHADOW
care for me
Shadow was shy as a puppy. He is still on the calmer side, but also enjoys playing. He is a large boy now and does not like to be alone for to long.
CODY
care for me
Cody is our Alpha male. He is very playful and stirs up trouble at times. He is also very sweet and loves attention from his humans.
WINTER
care for me
Winter has been the Alpha female from day one. She keeps her pack in line. She is very sweet with her humans, loves attention and loves to play.
JASMINE
care for me
Jasmine was one of our bigger puppies. She was FULL of energy and loved to chew as a small puppy; very curious about everything. She has since grown out of most of that and is gentle with the others. She lets them chew on her for play... kind of like a big sister.
PAX
care for me
Pax is very intelligent. She loves to play with her ball and prefers to lay low by herself for the most part, observing.
SAMPSON
care for me 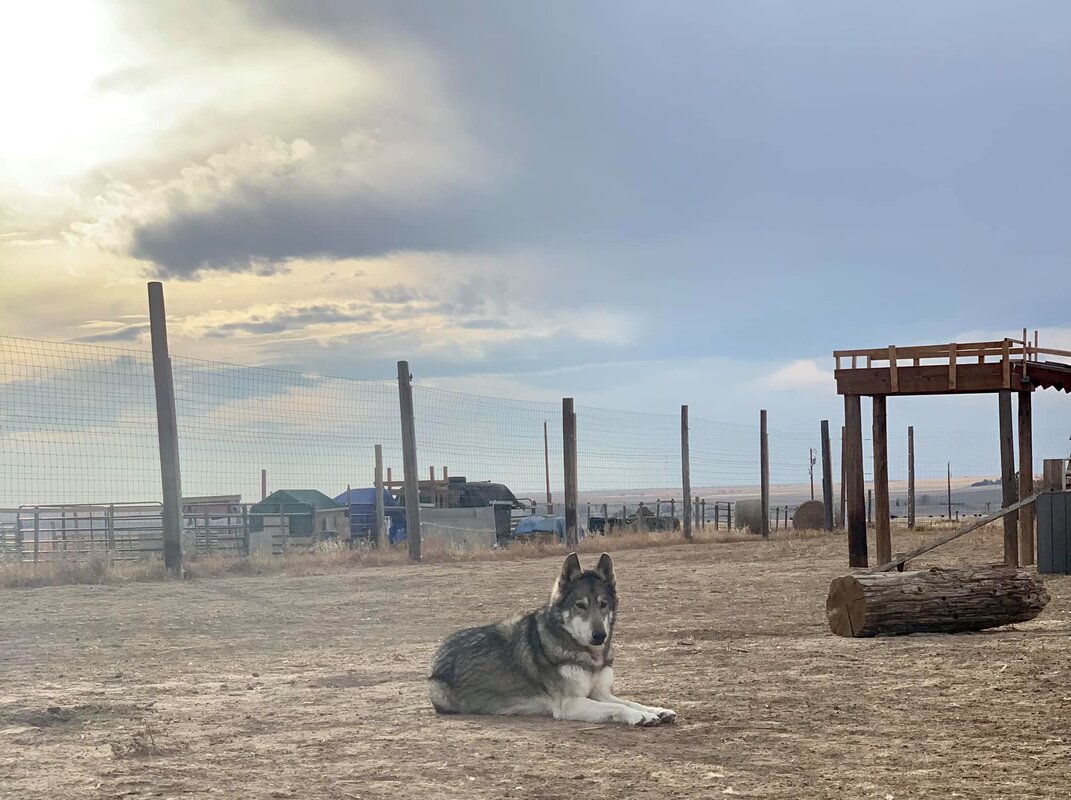 Sampson is a sweet, 8 year old wolf hybrid with a heartbreaking backstory. His former owner purchased him on the side of the road as a puppy after witnessing his breeder beating him. When he was 6 years old, he and 2 other wolves escaped from their owners yard. All 3 were shot by a local off duty sheriff due to fear and some element of ignorance. Sampson survived... unfortunately his two companions did not.The veterinarian was unable to remove the bullet that stuck Sampson, and he has lived with PTSD since the event. To make matters worse, the previous owner reported that very nearby neighbors regularly shoot their guns in the Arizona desert, further traumatizing and frightening him on a routine basis.
He was left so anxiety ridden from the shooting that he had not been petted/touched by his owner or others in nearly two years, nor could his owner get close or entice him to come to a call. The prior owner reached out to Reborn for assistance with her 2 wolf hybrids due to increasing difficulty caring for them and impending eviction.
Sampson was so anxious and stressed when Reborn arrived to pick him up, that after attempting to coax him for about an hour to our transport cage, we decided to not stress him further and contacted a veterinarian we were meeting with for our next rescue. She met us onsite and sedated him for a vet exam and to load him safely.
We are happy to report that Sampson is doing wonderful. He plays, loves his pools, naps and catches treats from his caregivers. 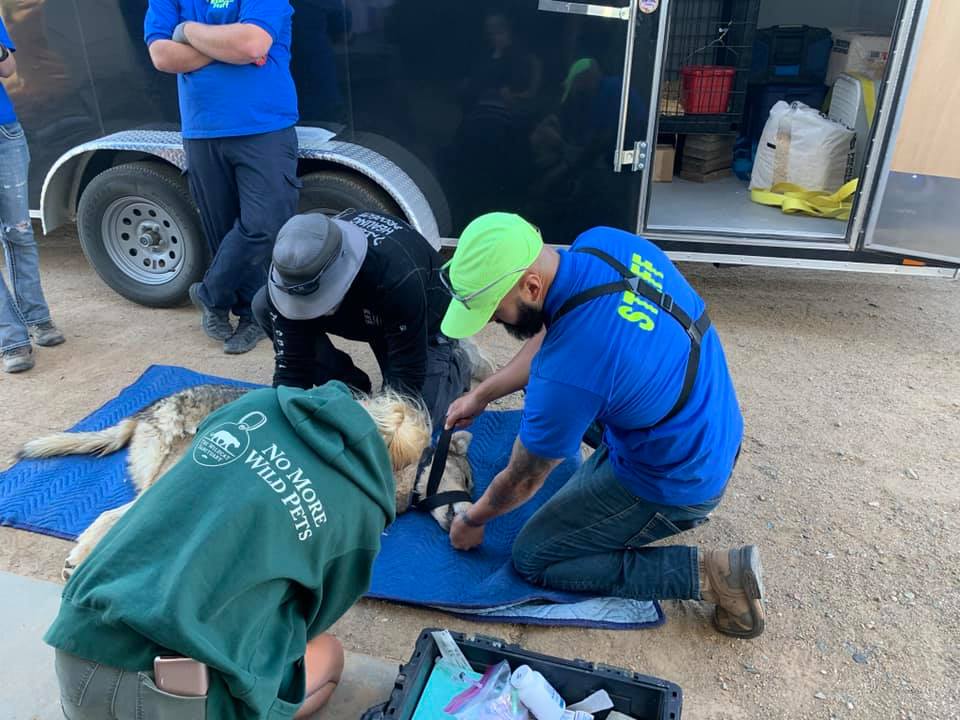 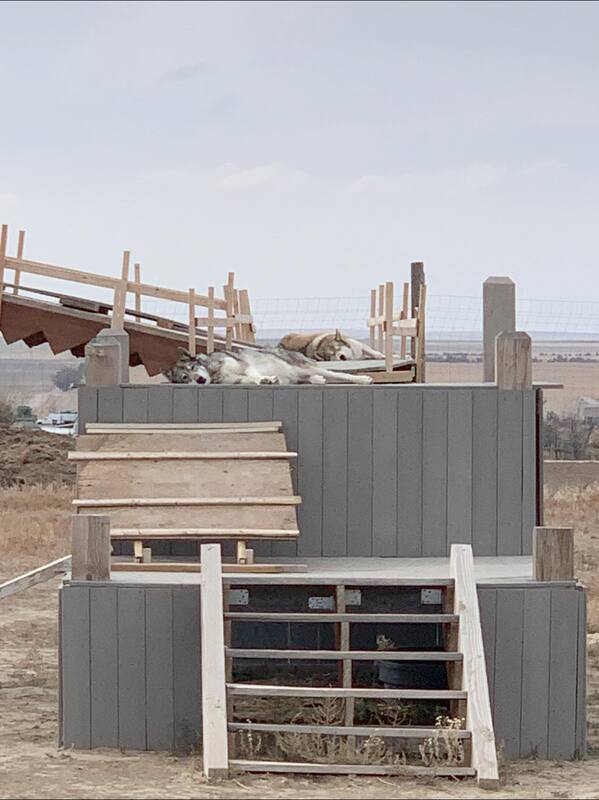 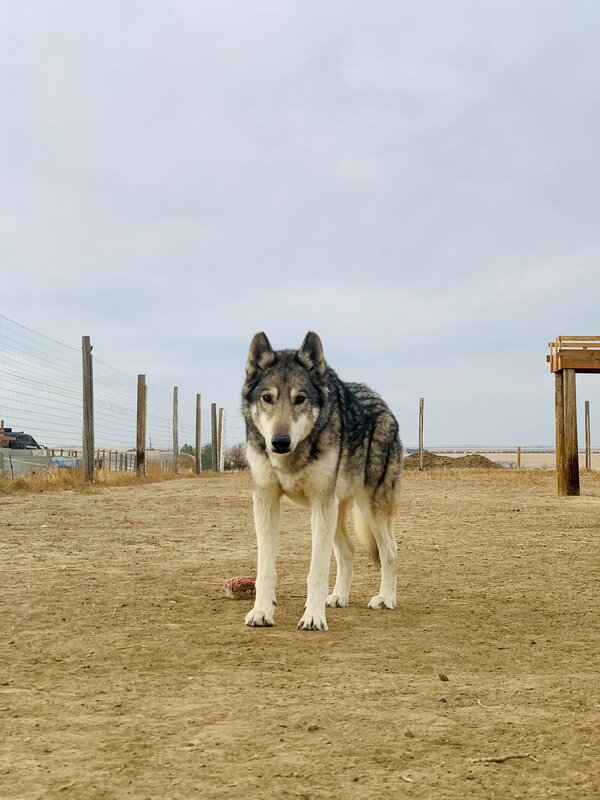 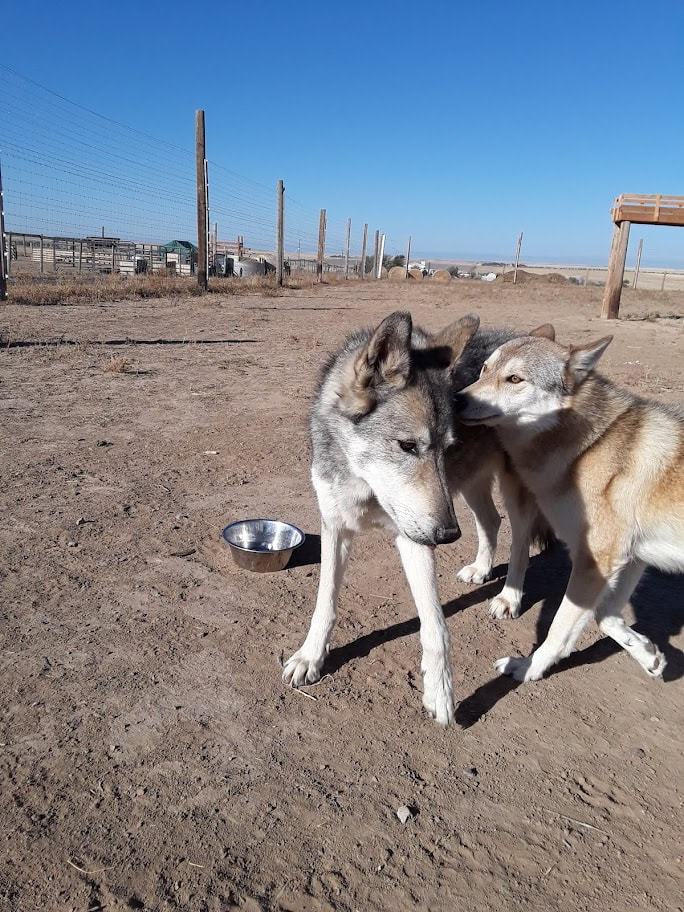 DELILAH
care for me 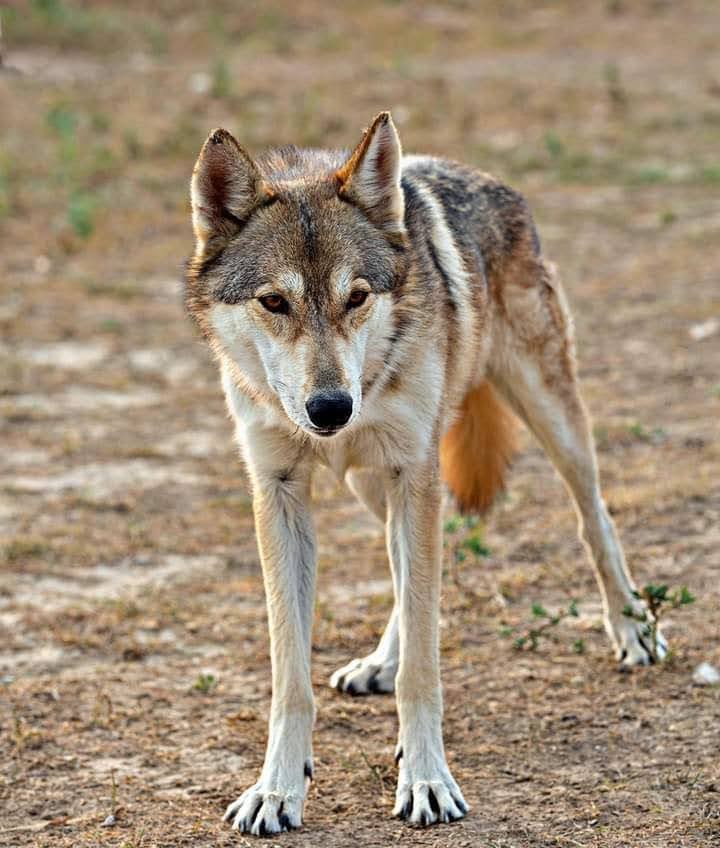 ​Delilah is a 1 year old female wolf-hybrid. She was purchased at a high cost from a breeder by a young lady living in an apartment in San Diego, CA. Within weeks of bringing her home, the owner quickly realized she was not a “pet”, even as a puppy! Unable to surrender the wolf-hybrid to an animal shelter (due to her wolf content), Delilah ultimately found her way to Prescott, AZ to live with Sampson. She has been Sampson’s protector ever since. These two are VERY bonded, so of course we did not want to separate them!
Delilah is making great progress. She is very curious, playful, loves getting treats, and loves to play with Sampson.
*Sampson and Delilah started at Reborn in an introduction lockout with an underground den to acclimate to the area, and were released into their full 1.5 acre habitat successfully where they are thriving. Sampson and Delilah have made huge progress since we rescued them. 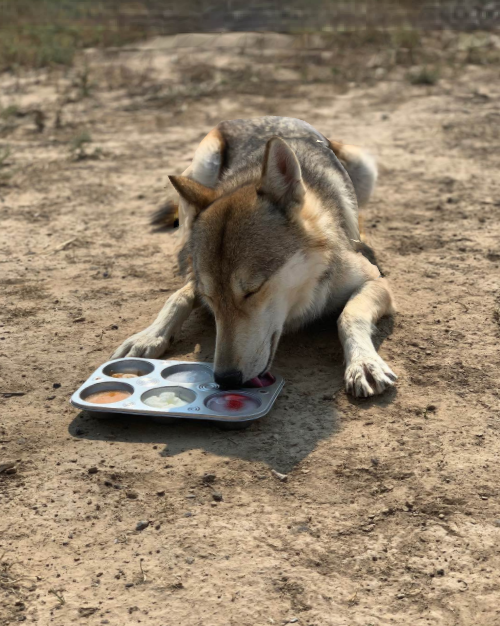 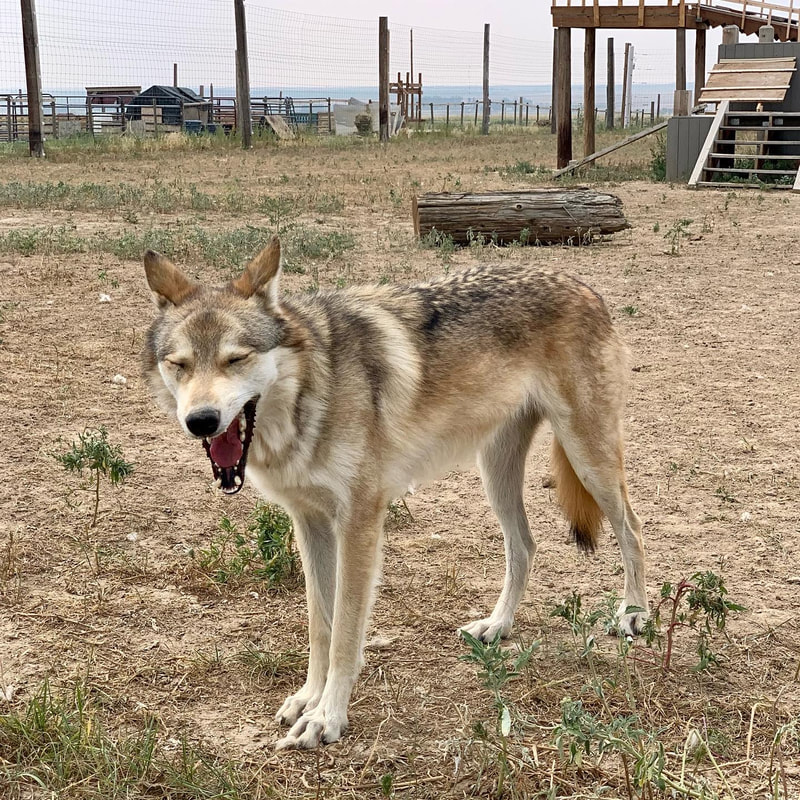 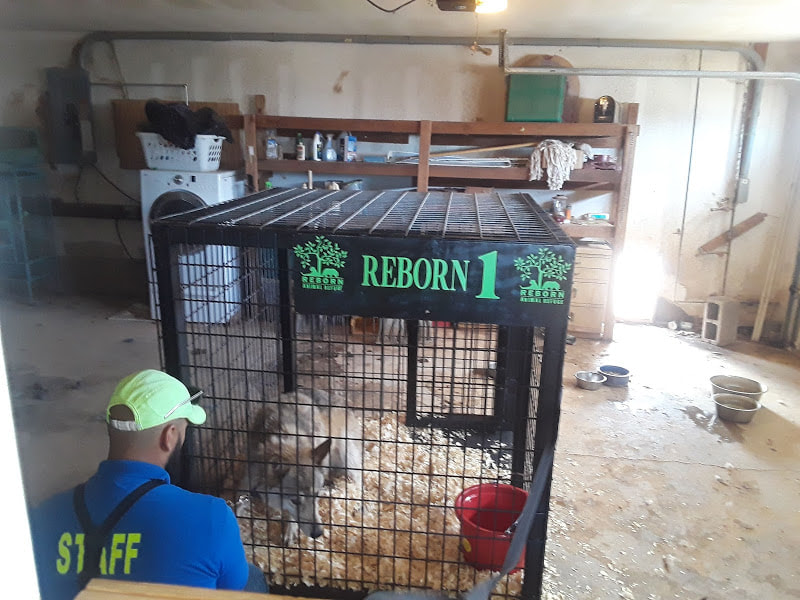 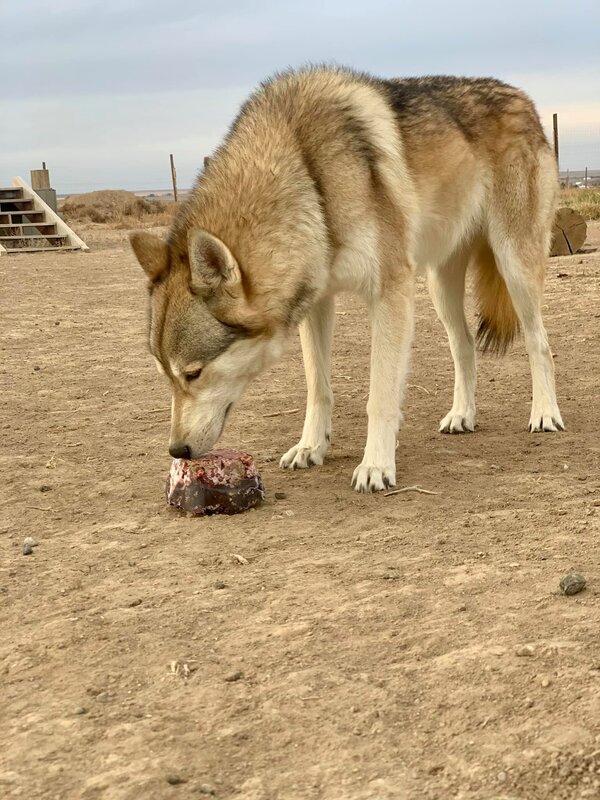 MILA
care for me 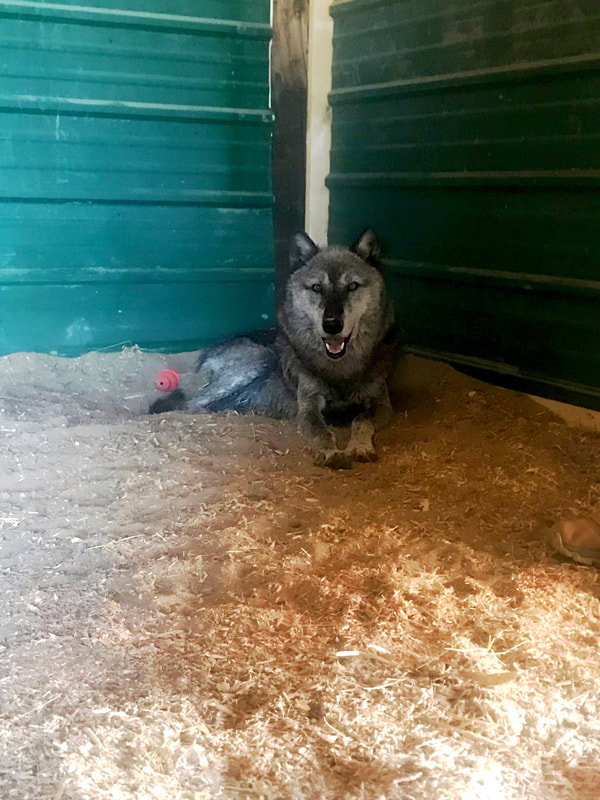 Mila is a 5 year old, high content British Columbia wolf hybrid who was bred in Illinois and then bounced from Nevada to Southern California. She has spent most of her past in a 5’ x 15’ cage and had endured abuse in her past.
Mila exhibited extreme pacing in her temporary transition enclosure when she arrived and was extremely sensitive and scared of even the smallest things, like birds flying overhead. She was very standoffish about new things and new people.
​We are currently in the process of building her a bigger 12,000 sq ft. area in addition to a 1.5 acre shared habitat.
We moved the puppies into the enclosure next to Mila to see if that would help with her anxiety and it did wonders for her. She has since taken on the role of surrogate mommy. Mila LOVES the puppies and vice versa.
Mila’s anxiety is down and she is not as scared. She is more curious, likes to play with the puppies and shows much love to her caregivers.
Mila still has a lot to overcome from her past, but despite her past, she has a lot of fight in her and she is making wonderful progress.
Listen to her magnificent howl on our FB page. 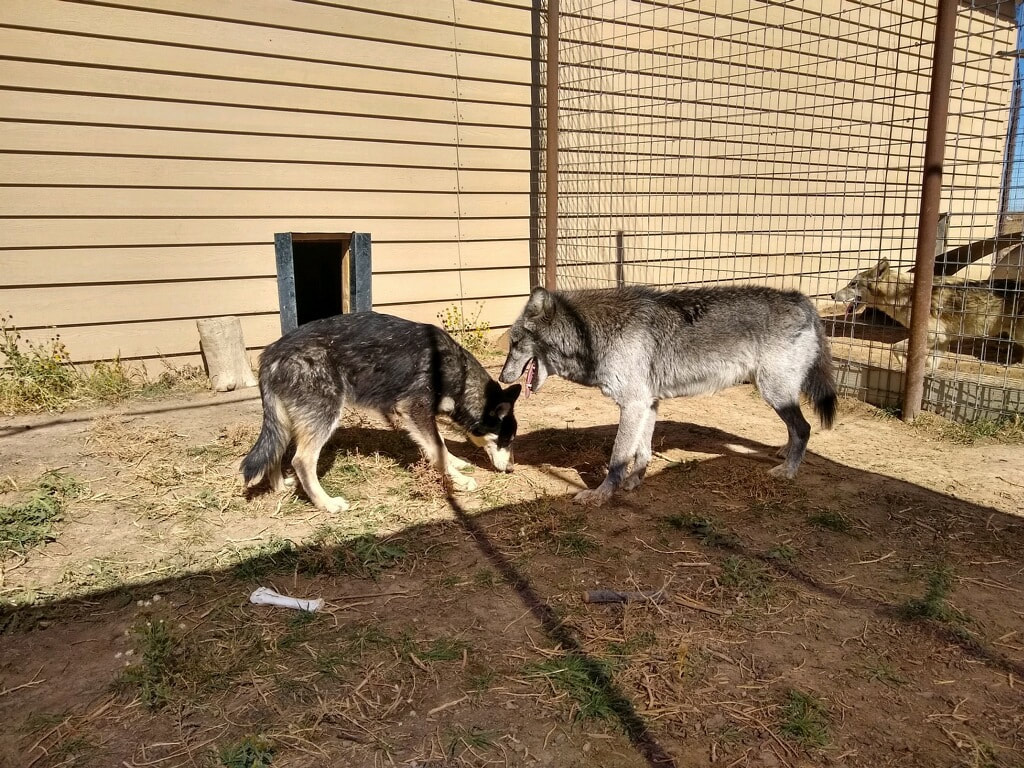 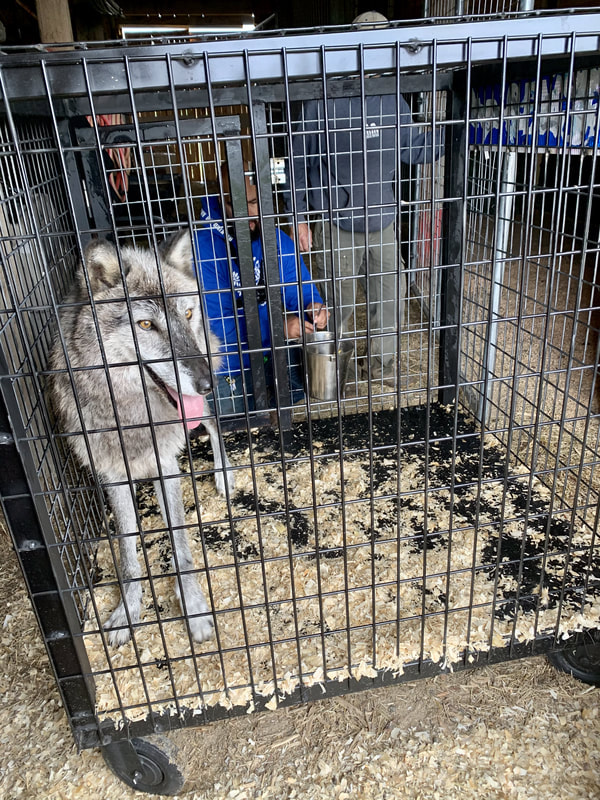 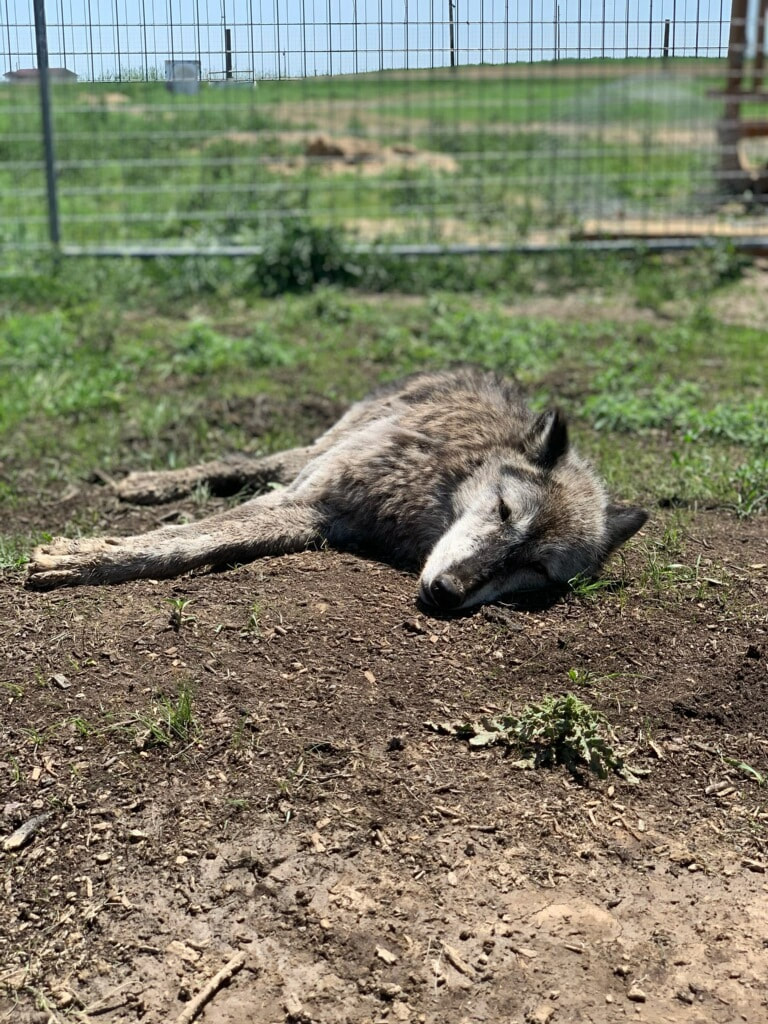 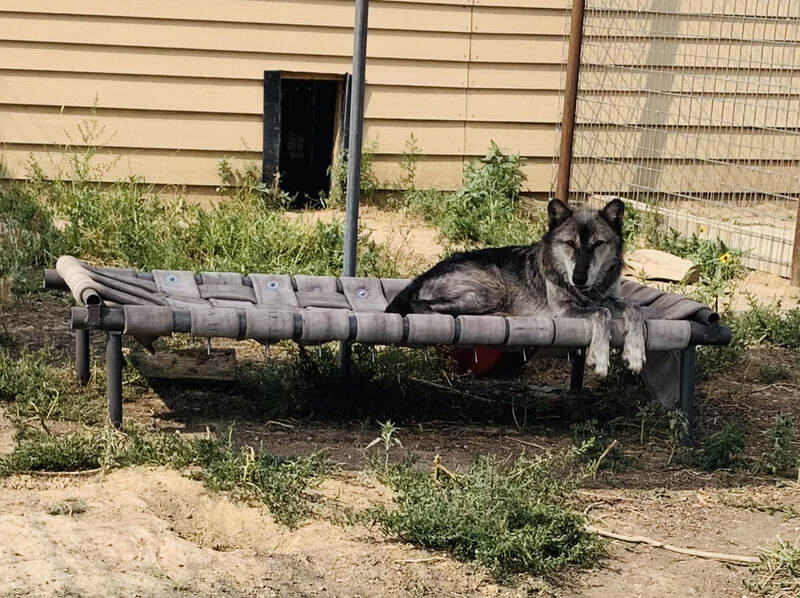 Hope's surgery update:
Oct 12, 2021
Our little Hope is as brave as they come. After her surgery she walked out from the vet this evening from Planned Pethood International like a champ, even though she isn’t feeling great right now. She is such a sweet, good girl and is now convalescing in her warm cozy bed. She’s had an upset tummy so she isn’t up to eating just yet, but tomorrow will be a new day.
Thank you everyone for keeping her in your prayers and thank you Dr. Jeff: Rocky Mountain Vet for taking such good care of our baby Hope.
Hope will need a follow up check up in a couple weeks to determine if she needs any further correcting of her Vulva
August 25, 2021
Her bloodwork came back and she does not have any evidence of a urinary tract infection so we can kind of rule out urinary causes of her discharge that being said CSU does believe that she has some sort of a reproductive based discharge coming out so although we don't think it has to do with her vulva it could be uterine origin or vaginal so they recommend doing a vaginoscopy for her to try to determine what is causing the infection. They believe her Vulva was injured right after she was born somehow.
August 18th, 2021
Taking our smallest littlest rescue, baby Hope, to the vet today at Colorado State University Vet Teaching Hospital. She is a small soul with a big heart and a ton of fight! Please wish her good luck today as she was a bit nervous going in. Hope has had some discharge in her private area. We are also having her Vulva looked at. She came to us with what we thought was a birth defect.
Medical care
Shadow and Cody:
November 17, 2021
Shadow and Cody underwent their surgery to be neutered on Nov 12th. They both did fantastic and are still recovering. They are happy to have each other for comfort.​ 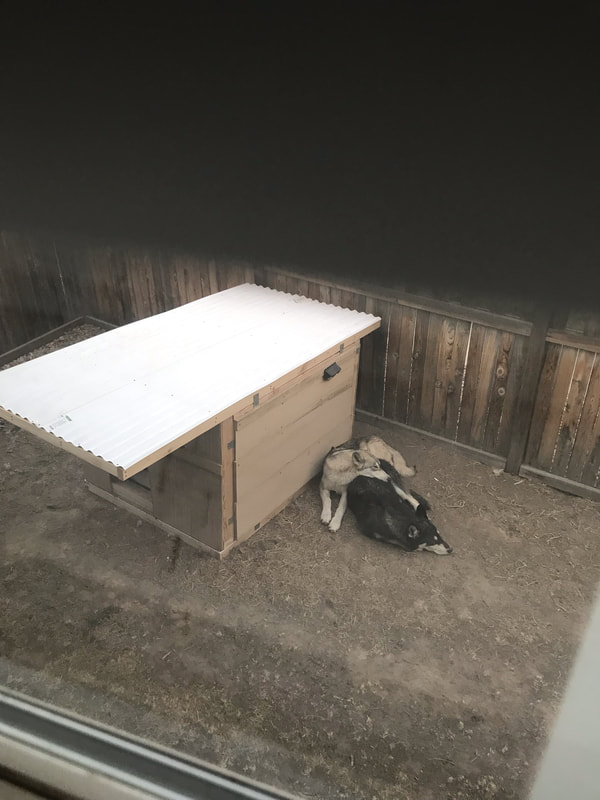 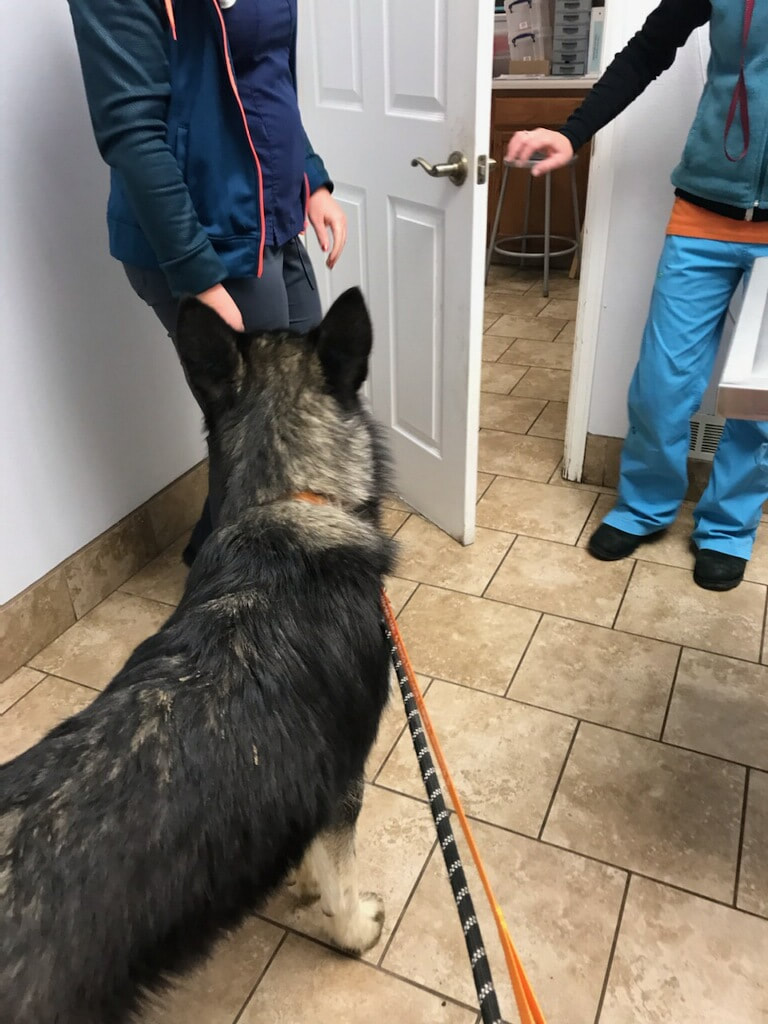 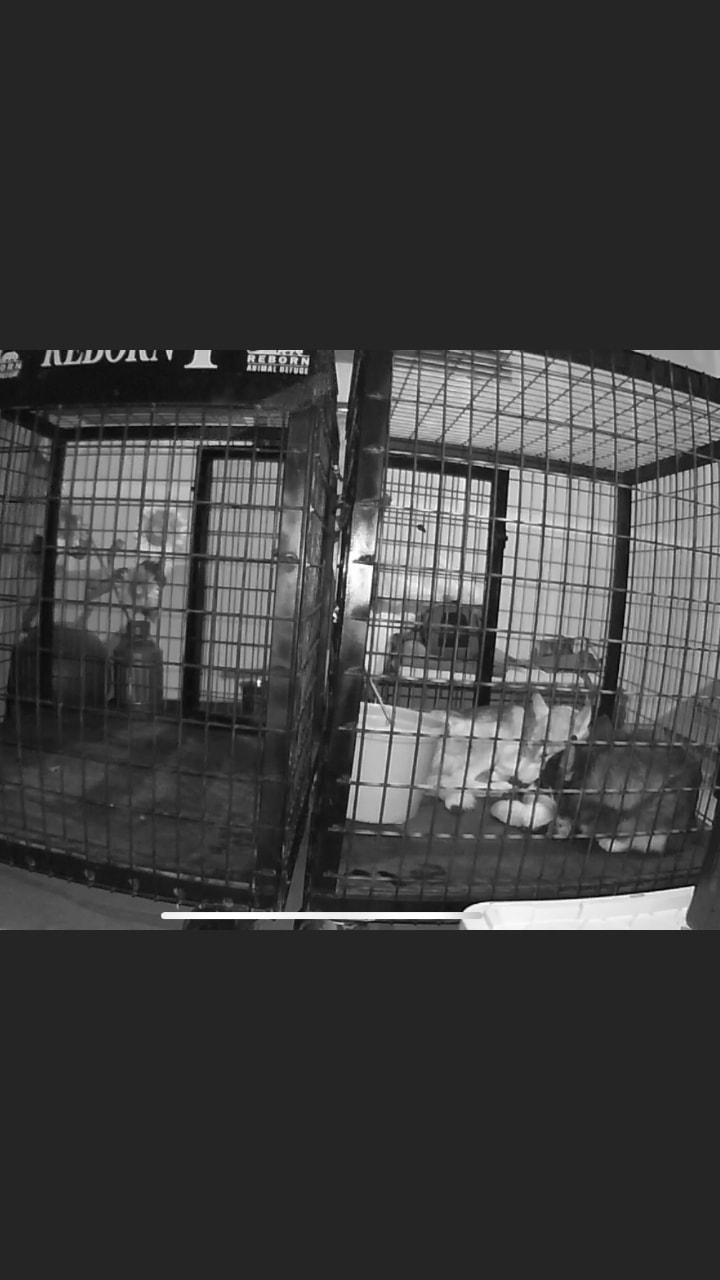 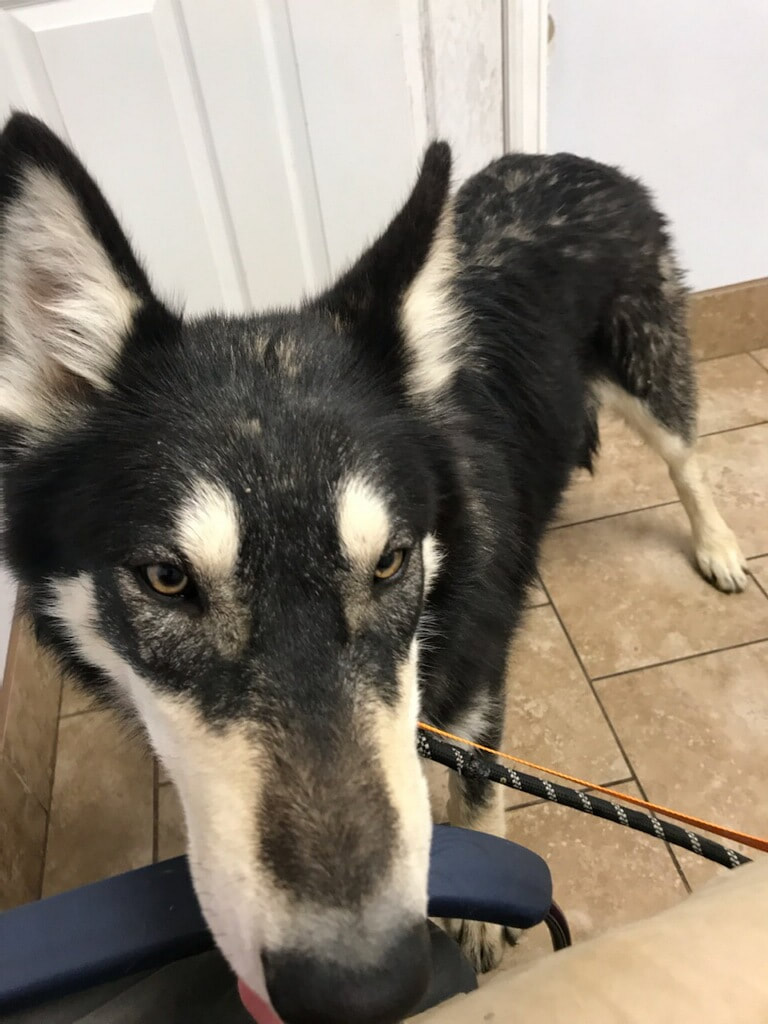 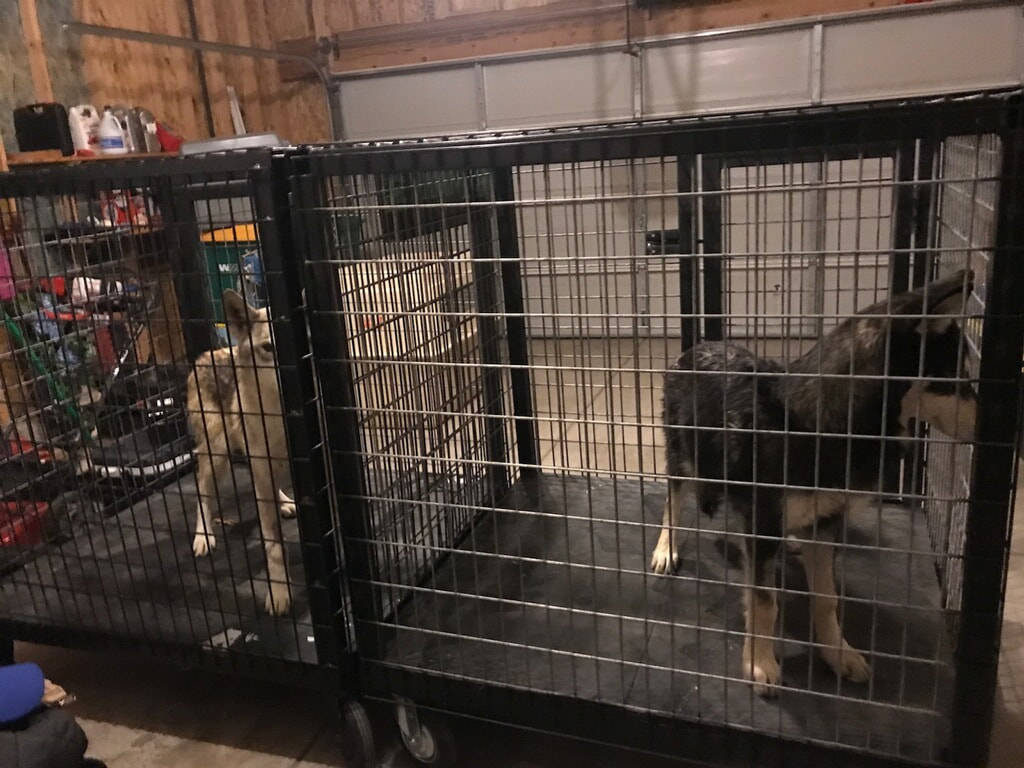