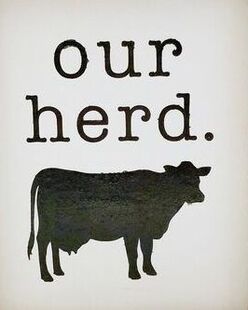 Steers:
Mel, Wally and Cocoa are Mini Highland Steers. A Scottish breed of rustic cattle. Highlands have a long shaggy double coat to help withstand intemperate conditions. They also have long, wide horns that they use to scratch their backs and to dig through snow to find buried plants.
Highlands can live up to 20 years, which is longer than most other cattle breeds.
Bulls/Steers weigh up to 1,800 pounds and Cows/Heifers weigh up to 1,100 pounds.
Highlands are not moo-dy. They have great temperaments and are friendly.
​Mel is the typical red color most seen today due to Queen Victoria preferring the red highlands, which resulted in selective breeding.
Cocoa is a black color which is a more rare color of Highland now, due to selective breeding to please Queen Victoria.

Vanilla (Nilla) is Holstein Steer, which is a typical black and white dairy cow. Certain Holstein breeds can weigh 2,500 pounds and be over 6 feet tall. HOLY COW that’s big. Nilla is definitely large. Good thing he does not know it.
​
​Mel, Wally, Cocoa and Nilla were being sold at a slaughter auction in Oklahoma when they were between 2-4 months old. Reborn specifically drove to Oklahoma to save some animals from that fate.
They were rescued June 8, 2019 with their "sister" Sheep, Baby.​
Sheep:
​Baby is an Aoudad Sheep, otherwise known as a Barbary Sheep. They are native to the Rocky Mountains in North Africa. They have since been introduced in North America, Southern Europe and elsewhere.
Aoudad sheep can weigh up to 300 pounds.
They darken with age and have longer hair on their neck
They are very good jumpers and can jump over 7 feet standing.
Although females are more aggressive than the males, Baby is very sweet and they overall have a friendly temperament.
Aoudad Sheep are trophy hunted a lot.
Baby was being sold at a slaughter auction in Oklahoma when she was between 2-4 months old. Reborn specifically drove to Oklahoma to save some animals from that fate. Baby was rescued June 8, 2019 with her cattle "brothers".
Goats:
Alvin, Simon, & Theodore are Nubian Goats, which is a British breed. They are known for their large size, facial profile and long lop ears. They have a short coat of hair. Females can weigh up to 240 pounds and males can weigh up to 310 pounds.
They have a friendly temperament and are quiet when content and vocal when they want attention.
Alvin, Simon and Theo all came to us on August 10, 2019. They were roughly 4 months old at the time. Their owner's home was foreclosed on and she said she would sell them for meat if they were not taken ASAP. Fortunately, a concerned person reached out to Reborn hoping we would be able to care for all 3 brothers and even donated to their care.
Mini Horses:
French Fry and Eclair are Mini Horses, which originated in Europe. Eclair is Bay color and French Fry is Palomino. They are a hardy horse that lives longer than the average horse, including full-sized breeds. They can live up to 35 years.
Miniature horses are actually bred to look just like tiny versions of a full sized horse, rather than a pony, and typically have the more refined features of a larger horse.
They can weigh up to 350 pounds.
They are friendly, gentle and playful.
Eclair and French Fry were displaced with 6 other horses during Hurricane Harvey in Houston and were the remaining 2. They were rescued by SPCA and were then taken to a rescue in Pueblo, CO for temporary care. They needed a long-term loving home, and came to us. We rescued them September 15, 2019.
Click to set custom HTML
DONATE TODAY